Why not get in touch with your local representative and see what events are on in your area. Go on, get that Anglia, Prefect and Van out and about in the UK.

Local Groups have risen from the Main membership Area’s to cater for the needs of the Members in that particular locality. Some of the Groups are quite large and some small. These are the Groups at present: 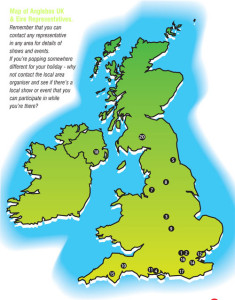 The Club also has the following Overseas Groups:

If there is no local Owners Club Group in your Area, and there are a few Anglia Enthusiasts that would like to get together at the shows, then please think about forming your own Local Group. In 1997 the North Midlands Group did just that (see their Letter from the 1997 Anglebox Magazine). 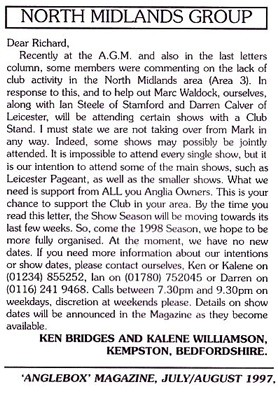 Historically, the Owners Club had split the UK into 6 Membership Areas (see the Map below)

This is why your membership number may be something like 419 / 2 where 2 was the Area that the, then, Membership Secretary placed you depending on your address. The Areas were: