(an article by Jim Norman)

This Article was originally produced for the Anglebox Magazine

The 105E Anglia and 107E Prefect had much in common mechanically, differences being in the form of details only. The most notable exceptions were the steering boxes and wiper motors. The Anglia had a conventional electric motor, whilst the Prefect’s were vacuum. “Vacuum?” I hear the Anglia owners ask.

The system appeared in the twenties or even earlier, when most cars still used 6 volt electrics, which doubled the current used by a modern 12 volt component. Charging systems of the day left much to be desired, so it was normal practice to minimise the electrical components on a car. Wipers take a heavy current, so an alternative power source was required. The wiper motor became vacuum operated. A close fitting paddle swung inside a semi circular housing. Vacuum was applied to one side, whilst air pressure on the other, pushed it to the end of its stroke, where a valve exchanged the air/vacuum sides, pushing the paddle back the other way. This swing action was transmitted to the wiper blade. The vacuum was provided by the inlet manifold. As a piston descends inside an engine, it draws air in after it. If the throttle is closed, no air can pass through the carburettor, so a vacuum or depression to be more accurate, forms in the inlet manifold. If the throttle is opened, air can get through, so the vacuum is partly or wholly destroyed. When Ford first applied the system, it was to their large-engined American bred cars, which could breath in more air than the carburettor could allow past, so no problems occurred. When they fitted the system to the 22 bhp Model Y in 1932, this all changed.

Of necessity, the little 993cc Y Type would often be driven at full throttle, at which setting the vacuum generated was none, so the wipers would not work, which made hill climbing and overtaking much more fun! Despite this shortcoming, Ford persisted and almost every pre-war Ford has this system, which continued on their vehicles after the war. The first new post war car was the Consul, with unitary construction, overhead valves, Macpherson Struts ….. and vacuum wipers! The problem was alleviated here, by adding a vacuum pump to assist the manifold at times of crisis. The wipers didn’t actually stop, but it was best not to go out in a storm. 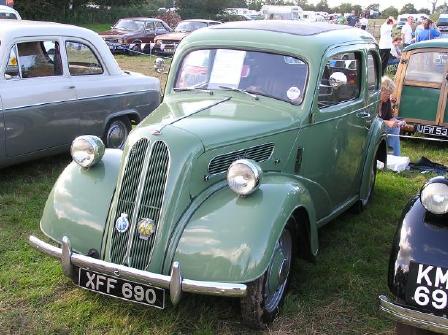 In late 1953 came the 100E range. The body shell was new, but lack of funds meant the mechanicals were merely revamped pre-war items. The motoring journalists noted the side-valve engine, mumbled about the 3 speed box, but complained loudly about the notorious wipers. Ford tried a different approach to the problem: a tank was filled in the circuit and this stored vacuum from times of closed throttle operations. When the throttle was next opened fully, the wipers continued using the vacuum in the tank until inevitably, this was used up and they stopped again. You did get further up the hill before this happened, but a quick ease of the throttle no longer got thinks moving again. You had to build up the tanks vacuum first!

By 1957, a facelift was called for and Ford had obviously paid attention to the complaints about the wipers. They fitted a bigger tank! You could now get further up the hill before Nemesis struck, but once they had stopped, it took even longer to refill the tank.

1959 arrived and the Anglia 105E was fitted, at long last, with electric wipers, but when its 107E Prefect cousin appeared, the vacuum wipers were back again. Ford had overcome two minor niggles with the 100E, the side-valve engine and the rather frustrating three speed box, but the major criticism of the wipers remained. The tank had gone, and a Consul type pump meant that they didn’t quite stop, but the road testers were definitely not impressed. 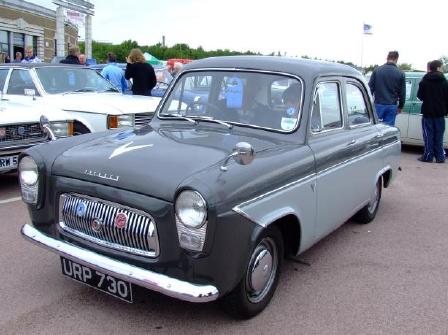 Most other manufacturers abandoned the system in the thirties, so why did Ford continue to apply palliatives to an obviously defective system, when the real answer was so obvious. It wasn’t as if an electric unit wasn’t available, Ford had been selling such an item as an aftermarket accessory since the mid-fifties. It was just never available as factory fitted. You had to buy the car with the vacuum unit fitted, remove this and then fit the electric one. It was stubbornness bordering on insanity and in the case of the 107E Prefect, was its only real failing.