It used the chassis, doors, windscreen and all the mechanical parts of the Anglia Saloon, but the body was of an all new design. This new design was drawn up by Michelotti and built by Officina Stampaggi Industriala (O.S.I). The Italian design did away with the protruding headlights, rear wings and sloping rear screen (All the attributes that made the Anglia unique and desirable) and replaced them with a more “European” influenced body. 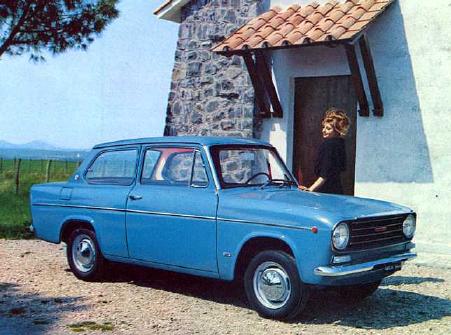 In reality the car was made to resemble a small, rather bland boxy saloon. The Italians were hoping to sell the car around Europe as an alternative to the standard Anglia 105E saloon, but their attempts to export the car to other European Countries never really got off the ground.Due to this, the Italians reputation for poor build quality and other problems that plagued the car, production was stopped after little more than a year.

This makes the Ford Anglia Torino quite a rare variant of the Anglia family.

The total number of 105E Torino’s built is unknown, but the number sold in Italy was 10,007