What is a Battery?

The simplistic view of a car battery is of a large rectangular object made of black plastic, with two metal bits sticking out of the top. There is, in fact, a little bit more to it than that. A battery is an electrochemical (“lead acid”) storage device that converts chemical energy into electrical energy. When the battery is placed under a load, such as when the ignition is switched on, the storage device converts stored chemicals into electricity, and the current flows through the wires to its destination.

How does a Battery work?

A standard 12-volt lead acid battery is made up of six cells connected in series.

Each cell produces just over 2.1 volts each. Because the cells are connected in series, it means that a conventional 12-volt battery is actually just over 12.6 volts when fully charged. A cell is the name given to an enclosure within the battery that contains two types of metallic plates and two terminals (i.e. positive and negative). One plate is covered in Lead (Pb) and the other in Lead Oxide (PbO2). All cells in the battery (six cells in a 12-volt battery) soak in a common chemical bath of 65% water and 35% Sulphuric Acid (H2SO4 ) called Electrolyte. 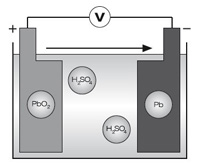 The plates are formed into a plate group, which holds a number of plates of the same polarity (ie, all positive or all negative).

The like-charged plates are welded to a post strap. The plate groups are then alternated within the battery (positive, negative, positive, negative). There is usually one extra set of negative plates to balance the charge. To ensure that the different plate groups don’t touch each other, non-conductive sheets called separators are inserted between them.

The battery case, which holds all these components together, is made from moulded polypropylene.A battery has two main cycles, the charge and discharge cycles.In the discharge cycle, a chemical reaction takes place inside the battery in which the lead (Pb) of the negative plates combines with the SO4 of the sulphuric acid to produce lead sulphate (PbSO4). In this cycle, the electrolyte becomes weaker (specific gravity decreases) and the positive and negative plates become more like one another. Since the voltage, or charge, of a battery depends on the difference between the two plate materials and the concentration of the electrolyte, and since this difference decreases during discharging, the battery loses power. To anyone who has sat in a non-starting car and cranked away as the battery grew weaker and weaker, this scenario will be immediately recognizable.

Open circuit voltage is also affected by temperature, and the specific gravity of the electrolyte at full charge.

Although the battery is a familiar engine component, battery terminology often varies.

Most people never give a battery a second though until it stops working. Although your battery is out hidden away under the bonnet and of sight, it should not be out of mind. Regular checks on the battery could eliminate any potential problems.

There are a few obvious precautions you need to take first:

Never work on a battery with a lit cigarette in your mouth or use a naked flame to light your
view. Batteries are filled with sulphuric acid, which produces hydrogen gas. Hydrogen gas, oxygen and a spark will cause an explosion very quickly.

Be sure you have switched the engine off, before you try to disconnect either of the battery leads.

Every once in a while it is advisable to check the battery for leaks, cracks, or bulges of the battery case. Dents or deformations of the casing can be caused by rough handling, which may have caused internal damage to the plates. If you see any obvious leaks or cracks in the casing, or a bulge in the plastic, then the battery needs replacing. 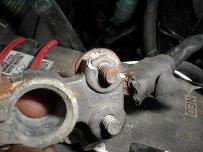 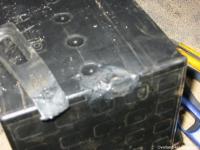 Swings in temperature could also cause your battery problems. Batteries that have been heated up by the engine or the sun can cause the acid inside to heat up. Extreme cold can cause the battery to freeze, crack and leak.

Warning – Never attempt to charge a battery if the electrolyte is frozen or the battery casing is cracked. 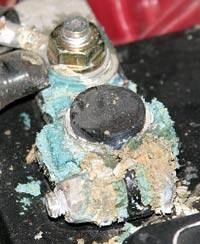 Corrosion at the battery terminals can prevent a car from starting, by adding resistance. The corrosion is in the form of a whitish yellow powder and is caused by a small crack in the casing, or by leakage past the seal, allowing sulphuric acid vapour to corrode the battery terminals (which are made of lead).

Warning – Be careful when dealing with the corrosive white powder as it is toxic by inhalation, ingestion and skin contact. It is also corrosive to the eyes, skin and any metal parts of the automobile with which it may come in contact. 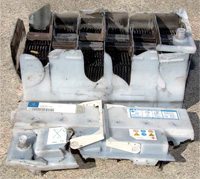 Batteries are filled with sulphuric acid, which produces hydrogen gas. Even when the battery is not in operation, the self-discharge action generates hydrogen gas, so make sure that the battery is stored and worked on in a well-ventilated area. Under very, very rare circumstances, and if all of the warning signs above have been ignored, a battery can explode. 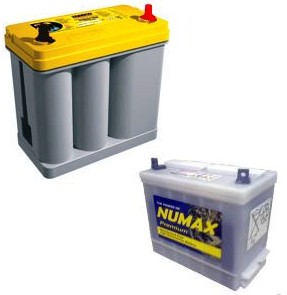 After all of this blurb, the one question you want the answer to is: “Which battery shall I use in my Anglia / Prefect”

Unfortunately there is no one answer for this. If you are running a standard Anglia / Prefect then a typical battery (12 volt, 38 ampere hour) known as a Type 037 is your best bet.

If you are running an alternator or a larger engine then make sure you have a battery to suit your particular situation.

To remove, check and clean the battery, you may need some of the tools shown below.

The minimum being some sort of spanner to undo the terminal leads to remove the battery.