My 5cwt Thames Van with windows, didn’t get used that much during winter. One February, I got it out of hibernation a couple of days prior to a show. All seemed well, no leaks and it started ok. I used it that evening to run a small errand, only to find on my return to the vehicle, the starter wouldn’t work. Well it did for about a nano second.

Waggled a few wires around like you do but to no avail.

Being dark and to cut a long story short, a tow was required, and she started. Strange I thought. The trip to the show proved to be trouble free. The next scheduled outing for the van was the MoT a few weeks later. Jumped in, pulled the starter, two turns then…nothing just stopped. This time was not so easy to sort out as the van was in a vastly overcrowded dark lock up garage. A tow out was required only to find the rear wheels locked up.

To cut another long story short the van eventually made it home. Removal of the starter motor revealed very little and a check of the flywheel teeth through the starter hole revealed nothing either.

I changed the starter and all has seemed ok since. One of the other intended jobs on my van was to upgrade the clutch assembly to a more modern diaphragm type. This was brought forward when the thrust bearing started making an awful noise at the MoT station.

A high pitched whine would be the best description, either that or I’d run over the MoT testers foot. So back home, out came the gearbox. This is another extremely even longer than long story which will form another tech article in the future, so fast forward ………. to the removal of the flywheel for further examination to the sticking starter problem I’d had.

The picture below shows that for some bizarre reason the teeth are very badly damaged, on the back edge of the ring gear, hence why on earlier inspection the damage could not be seen. The engine has done around 2,000 miles since total rebuild, and I know that the ring gear was in perfect health when initially assembled. The old original starter incidentally also had no damage to it either.

Anyway, I decided to change the ring gear. So here is how I did it.

Stick your kitchen oven on top whack which in my case was 230 degrees centigrade. Place your NEW ring gear on top shelf or middle with a fan oven. Now make a cup of tea for the missus so she has no need to see what you are doing for at least the next half hour!!!

I’m afraid the photos stop here as I was on my own doing this and trying to juggle hot metal plus a camera is pretty difficult.On the instruction tag that came with my new ring gear it said heat to 360 degrees centigrade. The Haynes manual though says 205 degrees. So who is right?? I doubt that many domestic ovens go as high as 360 degs anyway. So 230 degrees it had to be.

After 30 minutes, I removed the ring gear from the oven with very thick welding gloves. The replacement ring gear has a small chamfer on one bore side only, so common sense tells you to put it on this side first. I then gently tapped it on until it reached the retaining lip.

The first attempt failed so did the second and third. I eventually had to machine a small chamfer on the flywheel itself, just to get it started and I also left the ring gear in the oven for an hour, but I got there in the end.

Advice as always from me, The “Vanman” or the other tech advisors, phone numbers in the Who’s Who at the front of the Club Magazine. 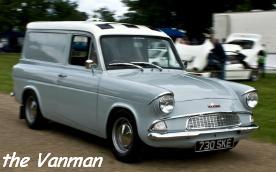 What the “Ford Professionals” Say 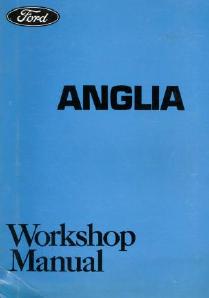 To Remove
1. Cut between two adjacent teeth with a hacksaw and split the flywheel ring gear with a chisel.To Install
2. Heat the new ring evenly to a temperature not exceeding 316 deg C (600 deg F) and fit the ring gear. Allow the ring to cool naturally in air. DO NOT QUENCH.

Warning – The Health and Safety bit

Please note your health may be at risk if you do not take sensible safety precautions. Never work under an unsupported vehicle, do not take shortcuts. If you feel that the task is beyond your capabilities, then employ the services of a trained professional. The Ford Anglia 105E Owners Club nor the author cannot be held responsible for any accidents or injury arising from advice given on this webpage. Safety advice can be obtained from the RoSPA. The advice and opinions given are purely those of the author and not necessarily those of the Ford Anglia 105E Owners Club.